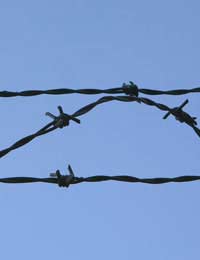 It may seem that the best way to avoid being burgled is to make sure that burglars cannot get anywhere near the property - especially for people living in semi-detached and detached houses. Placing barbed wire, broken glass, nails or carpet gripper on the wall surrounding the property may seem like the ideal solution. This may not be inherently illegal but there are restrictions on what householders can do - careful consideration should be given to the legal position before any of these deterrent methods are used.

Occupier’s Duty of Care to Trespassers

Anyone who owns, or controls, property has a legal duty of care to protect people on the property from foreseeable harm. This duty extends to people on the property without permission – including burglars and vandals. A householder could be sued for damages under the Occupier’s Liability Act 1984 if a burglar is injured whilst on their property. The test will be whether the householder could have predicted that a trespasser was likely to be injured. If broken glass has deliberately been placed at a likely entry-point, any subsequent injury suffered will have been entirely foreseeable.

A householder may be able to discharge this duty by warning trespassers of the hazard or by discouraging them from coming onto the property. This could be done by putting up a sign that warns of the danger: “Attention – Razor Wire on Wall!” and invites trespassers not to risk hurting themselves: “Keep Out!”. If a householder was sued, the court would consider all the circumstances of the case before deciding whether the householder was, in fact, liable for damages.

The Criminal Justice Act 2003 provides some protection to householders. If a trespasser suffers an injury during the course of a crime, for which he is subsequently convicted and for which he could be sent to prison, he will only be able to sue the householder if he gets the court’s permission to do so. The court is unlikely to grant permission unless the householder had taken grossly excessive steps or had not been acting to defend himself, his family or his property from an offence.

Section 164 of the Highways Act 1980 says that barbed wire on land adjoining a public highway must not cause a nuisance to humans or animals using the highway. Anything placed below 2.4 metres high will usually be deemed to be causing a nuisance and the local authority can issue a notice demanding its removal.

The Highways Act does not mention the use of nails or broken glass. However, these methods could injure innocent members of the public in the vicinity: a piece of glass could fall and injure someone walking past; or, someone could fall onto a low wall.

The police advise against the use of such methods of intruder prevention due to the risk of legal action if someone is injured. Of course, it is not only intruders and trespassers who risk being injured by barbed wire or broken glass. Householders owe a much greater duty of care to anyone on the property with permission including guests and people who have implied permission, such as the postman. Consider the danger posed to any children who may be visiting the property. If a child was injured after climbing on a wall in which broken glass is embedded, the householder is very likely to have breached their duty of care.

If in doubt about the use of any intruder deterrent method, householders should seek the advice of their local crime prevention or crime reduction police officer.

Local councils sometimes object to householders placing barbed wire on their properties and may insist that it is removed. Even if the householder has complied with the legal restrictions, the council may be concerned about their own legal position if someone is injured. Neighbours may object to obvious deterrent methods such as barbed wire because they look unattractive or because they may give the impression that a neighbourhood is more dangerous than it is.

If householders do use barbed wire they should check that their household insurance will cover them for any injuries caused by it.

A solid brick wall with trellis fencing attached to the top should be enough to keep most intruders out. The trellis should not be strong enough to support the weight of a human intruder and is far more attractive than barbed wire. Even more attractive are prickly bushes such as rose and hawthorne. Either of these methods will make a householder much less likely to fall foul of the law – or the neighbours.