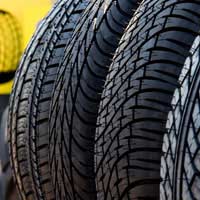 Over the course of the last two months the tyres on my wife's car have been slashed three times. Each time it has happened at night whilst the car is parked on our drive. Our other car is in the garage so that isn't any option. Is there anything we can do or a product i.e. wheel covers on the market that prevent this? It's costing a small fortune to keep replacing tyres and more importantly is very upsetting for my wife. Please help!

Unfortunately, there really isn't any product which will eradicate tyre slashing. It is for this reason that it is probably so enticing to the mindless vandals who slash car tyres - they can do it quickly and easily and not get noticed.

Various ideas have been suggested in the past, including alarms which go off when people get close to your car. However, most people agree that this is completely impractical as it would only take a small animal wandering by to set off the alarm - hardly a good idea in the middle of the night.

You have already hit on the best and most foolproof way of stopping people slashing tyres and that is to keep your car locked away in a garage where no-one but yourself can get to it. Have you considered renting another garage from someone who does not use it? Or even asking a neighbour who does not have a car if you can use theirs? Renting another garage may seem expensive but it could work out a lot cheaper than replacing tyres at regular intervals.

The other thing to do is to report it to the police. Tyre slashers could be mindless yobs looking for someone to terrorise such as yourself. Or it could be someone with a personal grudge. Either way, if they realise the police have been informed and they may be being watched, they will stop. Or you could try to swap your cars over and see if it is your wife's which has been targeted rather than yours. If so, is it a case of mistaken identity may also be worth attending a neighbourhood watch meeting and asking around to see if other people have had the same problem.

Finally, a last resort due to cost, but an effective way of finding out who is responsible is to install CCTV cameras on your property. The cameras themselves may be enough to deter the vandals and if they are not, they will go some way to helping you identify them. But the police should also be able to help you come up with solutions such as these - vandalism is a crime the same as any other and they should take your problem seriously.